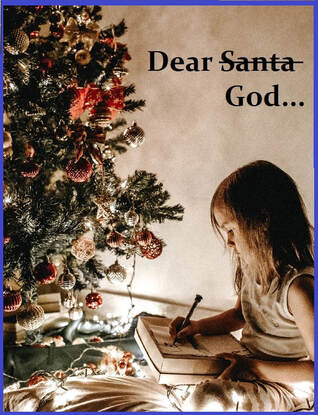 Yes, Virginia, there is a God!

In September of 1897, an 8-year-old girl, Virginia O’Hanlon, wrote a letter to the editor of New York’s Sun newspaper, which quickly became an iconic and classic work.  On  September 21, 1897 the Sun published the letter with a response attributed to newsman Francis Pharcellus Church. The letter has since become the most reprinted newspaper editorial ever and has appeared in dozens of books, movies, other editorials, and as references.


The original letter read: "Dear Editor, I am 8 years old. Some of my little friends say there is no Santa Claus. Papa says, ‘If you see it in The Sun it’s true.’ Please tell me the truth; is there a Santa Claus?"  It was signed, Virginia O'Hanlon.

The response was timeless and memorable and truly inspirational to both youth and adults across the country:
"Virginia, your little friends are wrong. They have been affected by the skepticism of a
skeptical age. They do not believe except they see. They think that nothing can be which
is not comprehensible by their little minds. All minds, Virginia, whether they be men’s or
children’s, are little. In this great universe of ours man is a mere insect, an ant, in his intellect,
as compared with the boundless world about him, as measured by the intelligence capable
of grasping the whole of truth and knowledge.
Yes, Virginia, there is a Santa Claus. He exists as certainly as love and generosity and
devotion exist, and you know that they abound and give to your life its highest beauty and joy.
Alas! how dreary would be the world if there were no Santa Claus. It would be as dreary as
if there were no Virginias. There would be no childlike faith then, no poetry, no romance to
make tolerable this existence. We should have no enjoyment, except in sense and sight.
The eternal light with which childhood fills the world would be extinguished…..
No Santa Claus! Thank God! he lives, and he lives forever. A thousand years from now,
Virginia, nay, ten times ten thousand years from now, he will continue to make glad the
heart of childhood."

This was an excellent answer to, understandably, a question of doubt.

The issue is that the author should have removed the name "Santa Claus", and substituted the name "God."  Then, everything else fit as perfectly as it might in this modern age of atheism and paganism… in this contemporary age of ego and self-centeredness, in this prevailing age of "I am God."

Today, fewer than 50 percent of people belong to a church, synagogue or mosque, and along with declining church attendance there is an increase of Americans who do not identify a religious preference - or even with a belief in God.

Yes, Virginia, there is a God.  Everyone will meet Him.  There is abundant proof of God if you know where to look and especially - how to listen.  And He exists as certainly as love and generosity and devotion exists.

Re-read the letter in the Sun, replacing "Santa Clause" with "God."

Yes, Virginia, there is a God, and He believes in you whether or not you believe in Him.