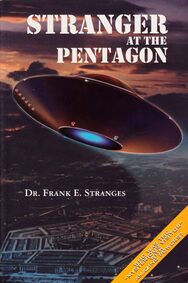 UFOs:
The Alien that Met the President

UFOs have been seen all over the world.  They have been filmed, people have said they have had direct contact.  And there have been many stories about them.  There are "normal" stories of encounters like the farmer who said they have visited him in peace on several occasions as friends.  And there are bizarre stories like the testimonies that aliens abducted people to perform physicals - including anal probing; that aliens were behind the numerous mysterious crop circles; that aliens have a base on the dark side of the moon; and that one race of aliens - the Nordics, are tall, have blond hair and blue eyes, and resemble humans so closely that they walk among us and cannot be detected as extra-terrestrial beings.

Enter Dr. Frank Stranges.  Dr. Stranges was born in New York.  He held degrees in Theology, Psychology and Criminality. He was a practicing minister and Chaplin. He also became fascinated on the subject of UFOs, and began serious inquiry and study into this phenomena. He served as president of the international evangelical crusaders, and the international theological seminary of California. He was the founder of the National Investigations Committee on UFOs, and his numerous presentations and works are recognized as an important contribution to the understanding of the UFO phenomena. He has written a number of books on UFOs, but in all probability is best known for his book "Stranger at the Pentagon" (Universe Publishing, 1991.)

Dr. Stranges said that he was introduced to an alien, Valiant Thor, who presented himself as being from the planet Venus. Valiant Thor was humanoid in every fashion as were the other aliens accompanying him, and could pass as humans in every situation.  They also had powers of telemetry as well as advanced technology far beyond human capapcity.

Stranges said in his book, "I was on my guard for fakes and frauds. In walked a man, about six feet tall, perhaps 185 pounds, brown wavy hair, brown eyes. His complexion appeared normal and slightly tanned. As I approached him, and he looked at me, it was as though he looked straight through me. With a warm smile and extending his hand, he greeted me by name.”  There was one substantial difference with Valiant - he had no fingerprints!
Stranges added: “His genuineness astonished me, but quickly I understood.…He told me that his purpose in coming was to help mankind return to the Lord. He spoke in positive terms…always with a smile on his face. He said that man was further away from God than ever before, but there was still a good chance if man looks in the right place. He told me he had been here nearly three years and would depart in just a few months.”

Dr. Stranges told the story of how to police officers picked up an alien in March, 16, 1957, who had landed about 14 miles south of the Pentagon. The alien was brought to the Pentagon to meet with the undersecretary of defense, and then after discussions was actually brought to the White House to meet with Pres. Dwight D. Eisenhower and V.P. Richard Nixon.

That first meeting lasted for nearly an hour, and then the alien, Valiant Thor, was brought back to the Pentagon where he spent the night.

Take Me to Your Leader

Valiant Thor had asked to meet with the President of the United States to discuss the problems of Earth, and to offer advice and his counsel on how to deal with these problems and eliminate them. He was especially concerned that Earth had a military, warlike mentality and if it would continue to proceed in this manner it could result in a catastrophic self-destructive mode for the entire planet.

His claim was that he was here for one reason only, to help Earth progress in a civilized, gentile manner.

He offered his counsel to the president and also stated that many aliens currently live on earth as well as on many of the other planets throughout the universe, he spoke of the nature of God and the presence of Jesus Christ throughout the universe, and he offered to share his knowledge and wisdom and understanding with our governments in a manner that would sustain life and eliminate social, economic and political problems, diseases, and famine. He also indicated that groups from a distant planetary system would be willing to come to earth and give aid and data and technology to help the Earth's progress towards overcoming these seemingly insurmountable problems.

Valiant Thor was invited to stay on earth and live at the Pentagon until March 16, 1960, when he then embarked on his spaceship to return to his home planet Venus.

During these years Dr. Stranges had numerous contacts with Valient Thor, and had learned much about and from him on the nature and the purpose of life.

Of course the Pentagon did not just assume all this was correct, so they asked to "test" the material of his uniform.  Val Thor agreed.  The military attempted to penetrate the material with a diamond drill bit, but it snapped under pressure. They tried acid, but the acid rolled off the uniform and burned a hole in the floor.  They fired a high-velocity rifle at the uniform but it failed to pierce it.  They tried a laser - a fine line of intense light amplification by stimulated emission of radiation, but Val just looked at the laser amusingly and it too failed to burn the material. The final report to the President on the nature of his uniform read: Physical appearance -- Soft silver and gold lustrous; Fabric -- Unknown; Weight-Six ounces, total, including boots; Cut -- Close fitting like a tunic; but no cuffs, pockets, buttons, zippers, clips or hooks (i.e. no way to detect how it could be put on and taken off); and RXT-2 Tests -- Indestructible.

Valiant Thor's meetings with President Eisenhower did not reap any lasting results. The President, naturally, wanted to let the world know of Val's existence and the necessity of his plan to help save Earth, but the Secretary of Defense, the head of the Central Intelligence Agency and the Military Chiefs of Staff were opposed to his suggestion. The President attempted to effect a Joint meeting before the General Assembly of the United Nations.  But this plan too was rejected. The leaders of the U.S. Government argued for a longtime afraid that if the people of this the U.S. learned of the Val's plan, they would otherwise reject the government or even him instead of the government.  Eisenhower even said that we are not ready to make such drastic changes - the corporations and factions will not yield their ways to the new proposals even if the entire planet was to benefit.

Nixon, the Vice-President, at one point intervened and insisted to the "pressure boys" that it was the President who needs to make the choice. But he was vetoed without even a chance to complete his statements.

There were others who knew about Val Thor, his spacecraft and his colleagues, and his meetings and mission.  But they were hit with rigid regulations with stiff penalties should they reveal Val's presence, and even one major newscaster who inadvertently learned of his visit through one of his paid informants was silenced by none other than the Central Intelligence Agency, which has since consistently disclaimed all knowledge concerning UFOs.

On March 16, 1960, Val dematerialized from the Pentagon, and departed from this phase of his Earthly mission.  He went to the outskirts of Alexandria, Virginia where his spaceship, the Victor One, and his crew awaited his arrival.
As his craft rose slowly, people stopped and pointed excitedly in that direction. Others stood motionless, transfixed by the sight. Then, U.S.A.F. jets were scrambled, but the spacecraft used their force-field and the planes were unable to see the craft and darted right past it. Even ground radar lost them on their equipment. Confusion once again reigned.

Strangely enough, those who knew of his presence, yet who claimed disbelief, were those who feared the most. Others figured THEY should have been the ones contacted and not those who were.

Upon returning to his home planet, he advised the interplanetary Council of Central Control of the results of his Earth visit including the failure of the leaders of the United States to "take him up" on his offer of advice and assistance to the human family.  He was given a new assignment: to return to Earth and to mingle with and become as Earth people, to work and labor in Earth enterprises, to help those who encounter possible threat or danger while continuing to strive for world peace, to give them advice and guidance, to entrust with superior knowledge those who have proven themselves, and to divulge the essence of their mission to the collective national leaders of Earth, only when the time is right.

Corporations, governments, and bankers and stock shareholders feel that they all have something great to lose if we-the-people change our military, economic and governmental systems from the status quo.  They do not just fear it, but believe they have so much to lose they despise and fight it.

It was reported by Dr. Stranges that Val Thor continues with this mission on Earth - to help our planet survive and evolve and to prevent our "civilization" from being the cause of chaos and destruction.

Perhaps one day the government will release the files concerning the visits by Valiant Thor.  More importantly, perhaps someday they will release the entire manual he presented to President Eisenhower that showed the way for the earth to achieve peace and prosperity.

If you believe Dr. Stranges story, then there is hope.  Help is still out there, and all we have to do is  just to say "Yes."