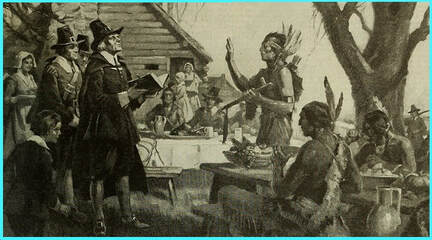 The Real Story of
Thanksgiving


Everyone knows the story of Thanksgiving, or so they think.  The Pilgrims landed at Plymouth Rock on December 11, 1620, and their first winter was devastating.   The Pilgrims had lost some 46 of the original 102 pilgrims who sailed on the Mayflower.

The harvest of 1621, though, was a good one and the remaining colonists celebrated with a feast.  This included about 90 “Indians” - members of the Wampanoag tribe, who with their Chief, Massasoit, had helped the Pilgrims survive that devastating first year.

That first feast lasted three days, and while history might suggest that they ate turkey as their meat in all reality they most probable ate duck, as waterfowl were abundant in the bay area. Massasoit, the chief of the Wampanoag tribe, also sent his men to hunt deer as venison was a popular meat.  Together, they also ate cabbage, onions, squash, and ground corn in a type of corn oatmeal.

But.... the Real First Thanksgiving was a Catholic Holiday

Thanksgiving is a Holiday, a national Holiday, and yes, it has remained a religious holiday in respect. There are numerous historical precedents demonstrating that America was deeply committed to religion, and American history does recognize the importance of Thanksgiving to God by both the earliest settlers as well as by the vast majority of Americans throughout this time.

But more interesting, however, is the fact that the real and the first Thanksgiving was a Catholic Feast.

One researcher found that St. Augustine, Florida, the nation’s oldest city, was the actual site of the nation’s first Thanksgiving.  (“The Cross in the Sand,” Michael Gannon, December, 1965.)

In reality, the nation’s first Thanksgiving took place in 1565 when the Spanish founder of St. Augustine, Pedro Menindez de Avilis, and 800 Spanish settlers shared in a Catholic Mass of Thanksgiving. As according to Gannon, a historical expert on Florida, following the religious service Menindez had a communal meal shared by the Spaniards and the Seloy natives who occupied the landing site.

Thanksgiving was "Lost" but now is Permanent

But Thanksgiving was not held again for many years. It wasn't until June of 1676 that thanksgiving was again “proclaimed.” On June 20th of that year the governing council of Charlestown, Massachusetts, held a meeting to determine how best to express thanks to God for the good fortune their community had seen, and they proclaimed June 29th as "A day of Thanksgiving."

The real Thanksgiving was a Catholic Thanksgiving and while not commonly known to most Americans, this was a significant and vital prayer of thanks for the gifts and blessings of the Almighty.

Both the Spaniards and the Pilgrim Colonists realized that America is a blessing for the world, and a gift to be treasured and honored.  America is Blessed - and protected by the Almighty above.  It would befit all to continue those prays of thanks for all that America has been blessed with.