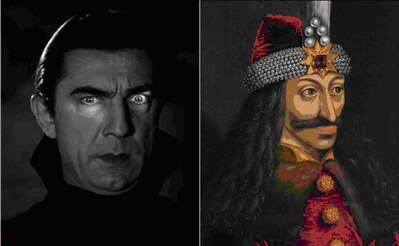 Count Dracula is one of the most iconic vampire stories ever written.  Dracula is a gothic horror novel written on May 26, 1897 by Irish author Bram Stoker, who wrote a number of sensational novels. It was immortalized on screen with the portrayal of Dracula played by the legendary Bela Lugosi.
The real story, however, is just as interesting as the movie version.

The vampire legend, "Dracula", is based upon the life story of the real Romanian prince, Vlad Tepes.

Prince Țepes was also known as Vlad the Impaler, and in Romania as Vlad III Drăculea.

He was born in 1431, in Sighissoara, Transylvania. He served as military governor through 1476 when he died having been was either ambushed by an Ottoman patrol and killed or otherwise assassinated. It was reported that he was decapitated, and his head was sent to the sultan in Constantinople as a trophy.

Vlad had to lead a fight against Ottoman Empire as they invaded the Slavic lands.

The reason he became known as "Vlad the Impaler" is because at one point the Ottomans came in and Vlad Tepes and his forces killed them all. He took all of them and impaled hem on "eight-foot-tall stakes" as a way to instill fear and warn them off.

In this way when the rest of the Ottomans came, they saw 5,000 dead bodies hanging on stakes, impaled.

History suggests that Vlad may have killed as many as 100,000 Ottoman Turks and/or other invaders to save his lands. As a military strategy it was quite effective and served to protect the lands from the savage onslaught of the Ottomans.

To the peoples in the West this would be seen as barbaric - a form of cruelty of the highest proportion, yet, to the people in Romania he was regarded as a national folk hero. He saved their homes - he saved their country.

The reason  Prince Țepes "Vlad the Impaler" became known as "Dracula"  was that he was in the "Order of Dracul", or the "Order of the Dragon."

This was a religious order, perhaps similar to the Knights Templar, and they vowed to fight the invading Ottoman Empire.

As Vlad's father was the first one of his family line to be a member of the Order of Dracul, he would have been known as Dracul.  Vlad - since he was the son, was known as Dracula - son of the dragon.  However, in the present day Dracula has come to be known as "evil."

So, in essence, "Dracula" - the fictional character of Bram Stoker was not a Catholic.  But "Dracula", i.e., Vlad the Impaler, was born of a Christian religious order necessary to fight off the invading Ottoman Empire, and several historical notes suggest that prior to his death Vlad did convert to Catholicism.

The novel "Dracula" was actually loosely based upon Vlad the Impaler. Before writing it Bram Stoker spent seven years researching European folklore and stories of vampires, visiting castles, and then he "married" several influential texts together to form this amazing ground breaking novel as well as the subsequent related works.

Stoker purposefully included many Christian - even Catholic references throughout the novel. It is in large part a Christian allegory, a tale between good and evil. At the very least the novel Dracula is a classic and iconic work that many critics attest has a strong Christian, and especially, pro-Catholic basis.