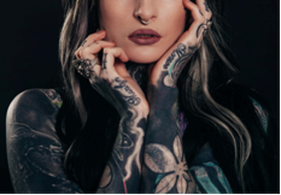 Ten Fads which are Outrageous and Nasty


Fads used to be simple.  College students might swallow live goldfish, or see how many students could be stuffed into a telephone booth, or how many hot dogs they could eat in an eating competition.

But over the years, fads and trends grew more complicated, and well, a little more extreme and on the off-beat side.  And in many ways people became more fixated on them - perhaps to draw attention, or perhaps to make a statement.

Here is a list of some of the more outrageous fads and trends that we see today.

1) Tattoos - Especially "Sleeving" and "Facial" tattoos.  So when did permanently marring and scarring your body gain such popularity?  When did it become "cool" to permanently scar your body?  Again, especially when young many think it's cool to get a tattoo, but they forget that a year later their tastes change.  New York may not be their favorite team.  The ink fades.  As they get older it stretches out of shape.  The picture they wanted just isn't right.  The colors are wrong.  And of course, as we grow older we change our minds - no one wants to wear the same pair of shoes all his life, no woman wants the same purse, we change jobs, change houses, even change relationships - but a tattoo is forver!


2) The "F Bomb":  The "F" word is perhaps America's most profane and disgusting word.  Youth are disciplined and punished against using it, and it used to be a social scandal to use it publicly or especially in the presence of a woman.  Manners dictated that it was not to be used at all but if it was, it should be used judiciously and in a carefully prescribed manner.  After all, "F___ You" is both a curse and an inflammatory remark that is sure to excite even to the point of violence.  And then cable television began allowing the "F Bomb" especially on comedy shows.  And the music world joined in, especially with rap and hip-hop music.  Celebrities began to use it as commonly as any other word.  Today, a word that was almost relegated to the halls of ancient language history, continues to infiltrate proper dictum and demeans conversations and people.  This was a fad that almost died out, but now has been revived to even greater heights.


3) Ridiculous Fashions: Baseball caps on backwards, ripped jeans, pants around the hips, immodest halter tops, bare midriff shirts, extra short skirts, wearing pajamas out in public, etc.             There are two types of people:  one set are the perfectly dressed "fashinistas" who are obsessively devoted to the hottest trends.  And the other set are, also, themselves too, obsessively devoted to the hottest trends.  Lady Gaga was not the first to invent outlandish styles - but it is interesting how people accepted her even more so, rather than laugh or rebuff her.  Different is, well, different.


4) Blaring Rap Music:  "Rap" is an outgrowth of the Hip-Hop movement.  It can originally be detected as early as 1971 and old school rap from 1979-1984. But the true "movement" of rap music with the complex vocabulary, enunciation, breath control, and poetic verse developed as a mainstream venue around 1979 and continued to build and develop, ex. as gangsta rap in the 1990s.  Today it remains a primary music venue although many object as they find it loud, obnoxious, profane, racist and sexist.  If mainstream culture in the 1950s were offended by early rock and roll music, they could never have expected rap.


5) Using the "N" Word: The "N" word is the ultimate insult.  It has been used by people in a state of anger not only to insult a person, but to demean him and strip him of all dignity and worth as a human being.  Like all racists remarks, it is a most hurtful and spiteful retort.  Jesse Jackson was one of the first people who called for a moratorium on using the "N" word, and he received overwhelming approval and positive response.  People understand that even as insults go - there are boundaries and it is never allowable to broach those lines.  Enter today's rappers.  Somehow, they were given permission to create a (perceived) "evolution" of the "N" word, to mean friend.  Not so, though.  It still remains a double-edge sword because it has different meanings for different speakers and within different contexts.  In other words, for consistency and respect for all, the "N" word should be always seen as profane and inappropriate for use in any circumstance. If someone is a friend or brother or partner or companion, address them with a respectful title.


6) Diet Fads: There have been as many Diet Fads as stars in the skies.   People have tried the Twinkie Diet, the Water Diet, the Baby Food Diet, the Juice Diet, the Grapefruit Diet, the Cabbage Soup Diet, the Potato Diet, Shakes, Pre-made Meals, and even extreme diets like the "Cleansing Diet" (don't ask.)
Several have proven true and beneficial such as the Keto or Low-Carb diet or the Mediterranean Diet.   Most, however, have been "invented" either by hucksters, or worse - by corporations that claim some miraculous power for those who buy their pills, books, machines, videotapes, or other gimmicks.   Each year some 100 million Americans are active dieters.  The diet industry takes in over 3 billion dollars each year - a market total of over 66 billion dollars since the 1980s. The problem is that most of these pills and machines usually do not work, and the industry just repackages them with different names, shapes and sizes to re-purpose them to a whole new group of incoming novice dieters.  If truth be told, people should avoid these diet fads.  The best results come from finding a friend who has lost weight, and join him/her and modeling them, and working with them while keeping your hard earned money.


7) Vaping and E-cigarettes:  Cigarette smoking is the primary cause of cancer, heart disease, respiratory diseases and a host of other illnesses.  Tobacco kills more than 480,000 people annually – more than AIDS, alcohol, car accidents, illegal drugs, murders and suicides combined.  So while the government has made substantial progress in reducing smoking for both youth and adults, another industry has now emerged - the vaping and e-cigarette industry.
E-cigarettes are a relatively new product. They are battery-powered devices that heat a liquid, usually containing nicotine. The nicotine is mixed with chemicals like propylene glycol and glycerin, and they deliver these chemicals into the body in a vapor form rather than in a traditional smoke form like a cigarette does.
However, they aren't necessarily safer. They still contain nicotine which is still poisonous and addictive.  Also, one of the most dangerous things is that e-cigarette users don't necessarily try to quit because they think they are safer, and people using them often keep smoking traditional cigarettes longer instead of quitting. Research shows that anywhere from 70 to 90 percent of e-cigarette users are still smoking traditional cigarettes.  E-cigarettes will die out eventually. Watching people vape isn't the most delightful experience, and to be honest it isn't any better than watching your friends smoke.


8) Piercing:  Yes, women have had their ears pierced for decades, and in other countries piercings are a custom and rite that defines class and social strata.  But other than pirates, when did Americans begin to get piercings on their nose, navels, tongues, foreheads, nipples, and genitals?  What is the purpose?  And again, can piercings be attracting attention in the wrong manner?  Never-mind the usual problems associated with piercings: infections, cracked or split skin, rips as the jewelry gets caught in linen or clothing, scarring of the site, swelling, allergies, or damage to underlying nerves or blood vessels.  And many report that like tattoos, piercings themselves are addicting too – they get one, then want another and another – despite the pain and negative risks.  The primary question is why do people want to be different? Why do they insist on believing that piercing is the way to attractiveness or popularity?  Perhaps this is a time to wait and think, and to see if there are better and healthier ways to achieve that goal.


9) Long Unkempt Hair:  Long hair has had a historical basis of thousands of years, but then again barbers only became common in the last hundred years or so.  In America, long hair for men became “fashionable” during the late 1950s with beatniks and the poet culture, and in the 1960s with the hippie counter-culture revolution.  In America one of the first mass introductions of long hair was the Beatles who appeared on the national television show, the Ed Sullivan Show on February 9, 1964. Although by today's standards their hair length was medium, the Beatles were so popular that they started a mass movement of young males in growing long hair – and often, long unkempt hair.  The truth is that rather than making a fashion statement or rebellious pronouncement, the original roots for most were just about being unkempt and uncaring.  Long hair soon grew, however, into a type of fashion fad and more and more youth began to grow long hair – and eventually it led to adults - and now senior citizens - following the fad too.


10) Sexting: People think you can't get into trouble for texting.  A common myth is that you can't get in trouble for sharing your own pictures or videos, but sexting can have serious consequences and even result in misdemeanor or felony charges depending on the circumstances of the individual case, for example, posting “identifiable nude pictures of someone else online without permission with the intent to cause emotional distress or humiliation”.  In some cases a person may even be labeled as a sex offender.
One of the most dangerous fads, in fact a growing "fad" for both teens and adults, is sexting.  Sexting is using your phone, computer or camera to send sexual pictures, videos, or texts, usually of yourself, and usually in a seemingly harmless, flirtatious way.  That may seem like no big deal, but there may be some pretty big consequences to consider. For instance, you can never guarantee that these will remain private and not be passed on - either in the present or at some point in the future.   Pictures and texts often go wrong, especially if there is a mean fight or breakup and it turns out to be revenge sexting.
In every case where people have found themselves exposed, embarrassed or humiliated  in some adverse way, they always said they wish they had never started sexting in the first place.