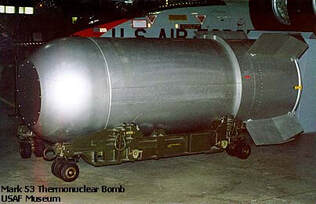 How Do You Lose an Atomic Bomb?

There has never been a threat to the very existence of the world more significant than that of nuclear weapons.  Many countries have expressed their deep and profound concern, and to their credit both the United States and Russia have taken (some) appropriate action to limit the number of such weapons as well as to exercise special caution such that accidental or other inappropriate use or discharge does not occur.

In the last New Start Strategic Nuclear Arms Control Agreement, both the US and Russia agreed to limit the number of deployed strategic nuclear warheads to 1,550 each.  This is an overall significant reduction for both countries, however there is still question about thousands of other non-strategic nuclear weapons that remain - and if these numbers are expanding.

There is also concern about other countries that are now nuclear-power nations, including the United Kingdom, France, China, India, Pakistan, North Korea, and perhaps including Israel and even Iran.

In all, there was an estimated high of 70,300 active weapons in 1986, and as of 2018 there are approximately 3,750 active nuclear warheads and 14,485 total nuclear warheads in the world. Many of the decommissioned weapons were simply stored or partially dismantled, and not destroyed.  The Soviet nuclear arsenal contained some 45,000 warheads at its peak (in 1986), and with the dissolving of the Soviet Union the weapons were entered officially into the possession of the Russian Federation - although there was some concern as to if any did fall into non-governmental hands or into the black market.

To be sure, the deployment of thousands of nuclear weapons demands extreme accuracy in management and accounting as well as in operations and procedures.  To account for even a few on a continual basis would be a formidable effort, but to maintain a constant high-level surveillance would demand almost a herculean endeavor of precise and unerring calculation.

Tybee Island:  How do you Lose a Bomb?

And then you have a bomber collision.  On February 5, 1958, an F-86 fighter plane collided with a United States B-47 bomber carrying a 7,600 pound Mark 15 nuclear bomb.  This happened near Tybee Island by Savannah Georgia.

The F-86 crashed, although the pilot safely ejected from the plane. The B-47 bomber, although damaged, remained airborne.

In order to reduce the weight and assure that the bomb did not explode during impact in an emergency landing, the crew requested permission to jettison the bomb.  Permission was granted, and the bomb was jettisoned.

The crew did not see an explosion when the bomb struck the sea, and the crew were able to land the B-47 safely at Hunter Air Force Base.

Several searches for the bomb were subsequently made, but all were unsuccessful.  The bomb was a Mark 15, reportedly with 400 pounds of conventional high explosives, enriched uranium, and a nuclear capsule with a potential of creating a fireball 1.2 miles wide and thermal radiation for ten times that distance.  The bomb remains lost around the shores of Tybee Island.

They are significant predicaments of the most serious kind and are the result of the laws of "chaos" - where probability meets unpredictability - the greater the number of weapons and deployments, the higher the chances of mishaps including losing them.

And, there are still several nuclear weapons which are still missing!

1) February 13, 1950:  On February 13, 1950, an American B-36 bomber coming from Alaska and traveling to Texas in a training exercise lost power in three engines and began losing altitude. The crew jettisoned a 30-kiloton Mark 4 (Fat Man) nuclear bomb to lighten the airplane, into the Pacific Ocean. While the conventional explosives detonated on impact, the bomb's uranium components were lost and reportedly were never recovered.

2) March 10, 1956: On March 10, 1956, a B-47 with two nuclear weapon cores from an airbase in Florida, disappeared over the Mediterranean Sea after becoming lost in a thick cloud bank.  The plane and the two thermonuclear bombs were never found.

3) January 24, 1961: In January, 1961, a B-52 carrying two 24-megaton nuclear bombs crashed while taking off from an airbase in Goldsboro, North Carolina. One of the weapons was lost in swampy farmland, and the uranium core was never found in site of an intensive search effort by the United States Air Force.

4) December 5, 1965. In December of 1965 an A-4E Skyhawk aircraft carrying a 1-megaton hydrogen bomb rolled off the deck of the U.S.S. Ticonderoga and fell into the Pacific Ocean, sinking to over 16,000 feet of water. It was never found.

5) Spring, 1968: In the Spring of 1968, the U.S.S. Scorpion, a nuclear attack submarine, sank mysteriously about 400 miles to the southwest of the Azores islands. The Scorpion was carrying two "unspecified" nuclear weapons that could yield up to 250 kilotons explosive power.  They were never recovered.

The loss of a nuclear weapon is inconceivable.  The potential damage, including long term radioactive fallout is incalculable.  The point is that the general public only knows of a few of these events.  The real question is how many are there that have not been reported - or better yet, how many are there missing when one factors in Russia and the tens of thousands of weapons that have been developed over the years.  This may yet present a catastrophe waiting to happen.