It is a parent’s worse nightmare, to get a call at 3:00 in the morning from the police that a son or daughter has been arrested.  Worse, yet, is if that call is from the hospital.


"Parents: if you are a non-smoking, non-drinking,
churchgoing, consistent, family-oriented, loving, disciplinarian,
the odds are overwhelmingly in your favor that you will raise a
positive, drug-free child."
- Forest Tennant, M.D.


The Prevalence of Drugs

One of the most critical factors destroying children today is alcohol and drug abuse.  It is a powerful risk factor - a social malady contributing to crime, rape, academic underachievement, sexual behavior, addiction, and numerous problems with health, mental health and emotional disorders.

But overall, eighth, tenth, and twelfth graders across the country have shown a substantial decline in drug use since the early-1990s.

- for Illicit Drugs Other Than Marijuana: past year use held steady at the lowest levels in over
two decades; (substances at historic low levels of use in 2018 include alcohol, cigarettes, heroin,
prescription opioids, MDMA (Ecstasy or Molly), methamphetamine, amphetamines, sedatives,
and ketamine);
- for Marijuana: daily, past-month, past-year, and lifetime marijuana use declined among 8th graders
and remained unchanged among 10th and 12th graders compared to five years ago, despite the
changing state marijuana laws during this time period. Past-year use of marijuana reached its lowest
levels in more than two decades among 8th and 10th graders in 2016 and has since remained stable.
- for Alcohol: use and binge drinking continued to show a significant five-year decline among all grades.
Past-month use of alcohol was reported by 8.2 percent, 18.6 percent, and 30.2 percent of 8th, 10th,
and 12th graders, respectively, compared to 10.2 percent, 25.7 percent, and 39.2 percent in 2013.
Daily alcohol use and binge drinking (defined as consuming five or more drinks sometime in the past
two weeks) also decreased significantly among all grades between 2013 and 2018.

Preventing Drug Abuse is one area where parents need to be pro-active in raising children.  Here, "An ounce of prevention is worth a pound of cure."

Too many parents have visited children in jails, hospitals, or psychiatric clinics and then realized and confessed their ignorance - they did not know what their children were doing or how dangerous substances really were.

A Child's Best Defense is an Educated, Disciplined Offense:

A child's best defense against harmful or inappropriate behavior is a loving and supportive family.  Here are several ways that parents can help build a strong foundation for drug-free children:

~ Show love and affection to children. Give lots of hugs.

~ Parents should act as a personal model of the kind of life and behavior expected from children.  Be a role model, and remember that the vast majority of adults do not smoke, use illegal drugs, gamble, or are heavy drinkers - in fact, one-third of Americans are total abstainers, and another major percentage are light or infrequent drinkers. Children are likely to copy parent’s self-destructive behavior (one study showed that 81% percent of parents who drink have children who drink, but 72% of parents who don’t drink have children who don’t drink.)

~ Set expectations and be sure to involve children in setting clear household rules, and in the consequences for breaking those rules.

~ Remind children frequently and openly of the family's “disapproval of use” attitude toward alcohol, tobacco or other drug use.

~ Allow children opportunities to show responsibility and encourage children to get involved in positive, constructive activities, and be sure to give recognition for their achievements.

~ Teach positive values such as honesty, fairness, respect for others and the law, and use “Teachable Moments" to assist learning.

~ Spend special time with each child, and occasionally alone if possible.  Make time for fun activities. Stay involved.  Parental involvement is one of the most important protective factors for youth.

~ Teach children to "Say No".  Peer pressure and media pressure are powerful influences.  Teach resistance skills, and help children develop a plan to avoid or escape places where they may be pressured to drink or use drugs.

~ Build as many "Protective Factors" into your family as possible, while addressing and removing the "Risk Factors."

How does one talk to kids about alcohol, tobacco and other drugs?  According to the Partnership for a Drug-Free America, do not worry about how to start the discussion, and do not get discouraged if it seems children are not listening.  Many youth said later in life that it was the advice and concern of their parents that kept them from alcohol, tobacco or drugs!  A parent cannot begin talking with children too soon, and as long as it is not badgering or threatening one cannot do it too often.

Use those “teachable moments.”   Make one thing crystal clear: alcohol, tobacco and other drugs are dangerous, and it is not acceptable that children use them!


“Parental involvement and religious activities are the two most effective
protective factors for teens… Parents who eat meals with their kids, know
where they are after school and on weekends, and are involved in their children’s
school activities and academics are likeliest to be parents of kids who don’t smoke,
drink or use marijuana or other illegal drugs.”
-- Joseph A. Califano Jr.
(former Secretary of Health, Education and Welfare)


Monitoring the Future, University of Michigan
Charts from 2018 Survey: 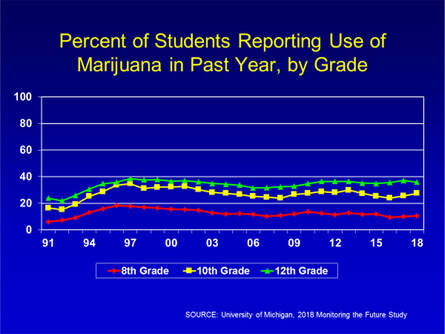 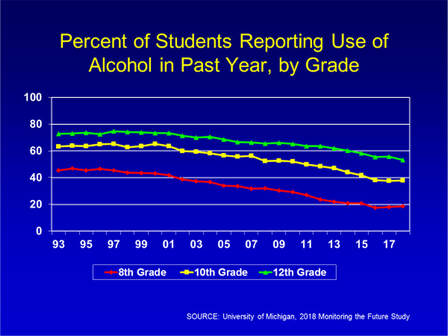 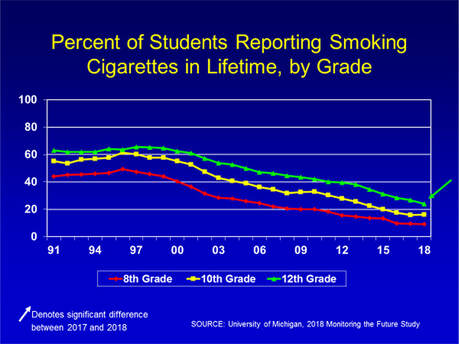 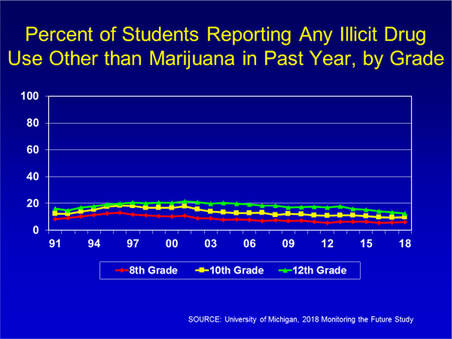