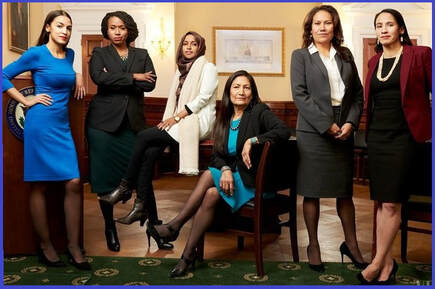 The Real Housewives
of Congress

“We are going to continue to be a nightmare to this president (President Trump)…
we are not deterred, we are not frightened, we are ready.”
-- Congresswoman Ilhan Omar


"Every third person in the world is a drama queen.
And crying 'victim,' especially when you're not really a victim
in any real way, feels good. It feels good to cry victim if you're not one."
-- John McWhorter

Drama and Ego and Self-Righteousness!

The cast of the series, no matter which location, seem to always be involved with strong egos, lavish lifestyles, affluent consumerism, self-righteousness, and high level living and spending.

As importantly, they always engage in DRAMA - in high level turmoil and turbulence - be it at home, at the office, at the restaurant or in the community.  The show always gravitates to the drama - and high intensity drama.

Drama defines these women. They moan and groan, accuse, complain, swear, argue, quarrel, squabble, grumble, and bitch.  They criticize each other, attack each other, slander each other, gossip about each other, and often join in a pack attacking the weakest and most vulnerable.

And then there's the Reality Show: Congress

And if there was a television show "The Real Housewives of Congress", there wouldn't have to be a script.  These ladies seem to naturally mimic the ladies of the other reality shows.
- The ladies attacked Nancy Pelosi - they go after the elderly.
- During the debates they attacked each other - they go after the weakest.
- And in any given day they attack and harshly criticize anyone with a differing opinion -
they go after independent thinkers.

The main difference between the television show(s) and the housewives of Congress, is that the show's cast know that this is for entertainment value and it is to a certain degrees "staged" - it doesn't necessarily reflect reality.  In Congress, however, the drama covers shallow public policy, pretentious speeches of justice and American values, and half-hearted attempts to reach across the aisle.

Congress, however, is not there for entertainment value.  And, unfortunately, the actual drama in Congress is much more realistic and not staged.

And in Congress the ladies just don't get it - they think they are the stars of just another reality television show!