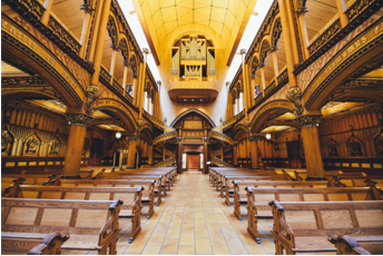 What Happened to Religion?

In the latest Gallup Poll, it was reported that membership in religious institutions has hit an all-time low in America.

The survey found that the number of people who belong to a church, synagogue or mosque dropped to 50 percent, and that there is a declining church attendance and an increase of Americans who do not identify a religious preference at all.  Fewer Americans than in the past now have any religious affiliation, and those who do identify with a particular religion are less likely to belong to a church or other pace of worship than in the past. The number of people who reported having no religious affiliation increased from 8 percent between 1998 and 2000 to 19 percent between 2016 and 2018.  "These trends are not just numbers but play out in the reality that thousands of U.S. churches are closing each year," Gallup said.

The survey was through telephone interviews with at least 2,000 U.S. adults (age 18-and-older), throughout all 50 states.

While the U.S. data shows an overall significant decrease in both property crime and violent crime in the past quarter century, residents are becoming suspicious at the data provided by government.  They have seen trends such as an increase in rape and murder, and a spread of crime from urban to suburban and rural settings.  Furthermore, there has been an uptick in violent crimes since 2017, and former communities which were crime resilient now see car jacking and house break-ins that were previously unknown.  Houseowners who previously never locked their doors at night, now take special precautions.
In 2017, there were an estimated 1,247,321 violent crimes nationwide, 6.8 percent above the 2013 level.
There were an estimated 382.9 violent crimes per 100,000 inhabitants in 2017, with an increase in forcible rape (30.7 per 100,000 inhabitants) leading the way.  Aggravated assaults accounted for 65.0 percent of violent crimes reported to law enforcement in 2017, robbery accounted for 25.6 percent of violent crime offenses; rape accounted for 8.0 percent; and murder accounted for 1.4 percent.  Firearms were used in 72.6 percent of the nation’s murders, 40.6 percent of robberies, and 26.3 percent of aggravated assaults.
So while there is good news in that crime and violence has decreased since the turn of the century, in fact there are indicators of rising crime that cannot be overlooked or neglected.

According to Joseph Califano, then President of the National Center on Addiction and Substance Abuse (CASA) at Columbia University,  “We have all witnessed the savage human toll of alcoholism and addiction.  We now know enough to save millions of lives over the next several years.  Whether we do so or not depends on our willingness to act.
Addiction affects 16 percent of Americans ages 12 and older – 40 million people.  That is more than the number of people with heart disease (27 million), diabetes (26 million), and cancer (19 million.)
Addiction is America’s number one killer and crippler.  It’s a tough adversary that won’t yield to token efforts.  Every one of us has a role in the effort to control and eventually lick addiction.”

Alcohol and drugs are an epidemic.  Every 19 minutes someone dies from an opioid overdose, and millions of families are devastated each year because of alcohol and other drug abuse - marijuana, heroin, uppers, downers, cocaine, meth.  They are social ills which destroy good people and good families, and the use and abuse are increasing throughout the country.

U.S. suicide rates are at their highest since World War II, according to federal data, and the  widespread use of social media, the high rates of stress, high rates of divorce, and impending feelings of hopelessness may be among many of the contributing factors.
According to an analysis released by the Centers for Disease Control and Prevention’s National Center for Health Statistics, 14 out of every 100,000 Americans died by suicide - that’s a 33% increase since 1999, and the highest age-adjusted suicide rate recorded in the U.S. since 1942.
Men have historically died by suicide more frequently than women, although female suicide rates are rising more quickly.  Nearly every ethnic and age group saw an increase of some size from 1999 to 2017, but suicide rates are rising rapidly among boys and girls ages 10-to-14 - more than in any other age group.

According to an article by the American Psychological Association, healthy marriages are good for a couples’ mental and physical health. They are also good for children as growing up in a happy home protects children from mental, physical, educational and social problems. However, today, about 40 to 50 percent of married couples in the United States divorce and the divorce rate for subsequent marriages is even higher.
There are a multitude of problems with divorce.  Often people think about the most obvious problems like financial ruin or child custody, but other problems are often much more pronounced - and usually permanent.  For the adults it can ruin their ability to form future mature relationships.  It can impact upon their extended family, affect their emotional stability, and negatively impact upon their social circumstances.  For children it can have direct impact on children’s development, their emotional maturation, and can negatively influence behavior - causing disruptive behaviors, and resulting in them being more likely to experience poverty, educational failure, early and risky sexual activity, alcohol and drug abuse, non-marital childbirth, cohabitation, and marital discord and divorce for themselves.
Certainly, as the family is a cornerstone of society, the needless dissolution of a family should be a concern to all.

Why the Increases in Social Ills?  Because Religion is a Protective Factor

Religion, in addition to being a personal salvation for so many, is an insulator - a protection - against the scourges of society - crime and violence, alcohol and drugs, suicide, divorce, and a host of other social ills.

Society teaches many paths to health and wellness, but interestingly enough, it tends to overlook one of the most important – the role of religion in the family.  The drop in the importance of religion for both youth and adults should be very disconcerting to families.

Anthropologists and sociologists have both acknowledged the role that religion plays as one of the pillars of a civilized society. The Search Institute listed religion as one of the 40 assets needed for positive youth development.  Hawkins and Catalano listed it as a protective factor for youth that buffers against violence, delinquency, and drugs.  A study of 16,000 youth published in Social Science Research, shows that youth with religious parents are better behaved and adjusted than other children and have better self-control, social skills and approaches to learning than kids with non-religious parents.  Other studies show that religion reduces crime, contributes to health and mental health, and is a primary factor in joy and fulfillment.

Faith, when active and nurtured through the practice of religion gives purpose and meaning to life, gives direction, and deepens a sense of something to strive for - something greater than oneself.  It tempers passions, forms consciences, and helps put things in proper perspective.

Religion has a "grounding force".   It is not only a powerful predictor of positive behavior, but insulates against "sin" - against illegal, illicit, unethical and immoral acts. Through religion one learns the moral value of the commandments - to not lie, cheat, steal, or commit adultery - and to honor one’s parents.  One learns the importance of sacrifice, forgiveness, penance and reconciliation, and charity, and the importance of practices including worship, prayer and fasting.  In effect, it adds to the wholeness and goodness of society.

The Family Practice of Faith

Perhaps the greatest gift parents can give to children is faith, and the truest way to bestow it is through the family practice of religion.  Father Patrick Peton, a Roman Catholic Priest once said, "The family that prays together, stays together."

Religion is still sacred and it inspires goodness - a quality that America desperately needs today.