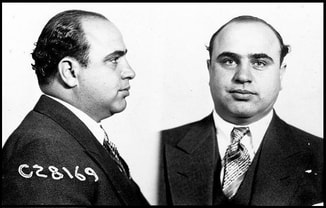 Is Al Capone in Heaven…

Al Capone was not a good man.  And that is stating it mildly.  According to historical accounts he was a ruthless killer, ran brothels and bordellos, cheated on his taxes, ran liquor during prohibition, fostered illegal gambling activities, and perpetrated numerous frauds.

All together he was arrested or indicted twenty-one times between 1921 and 1932, although he "beat" most of these charges and walked away from prison time and again. It was reported that during his lifetime he was blamed directly or indirectly for between 500-and-700 deaths, including the infamous Saint Valentine's Day Massacre when seven hoodlums were gunned down execution-style. Yet, he was never charged with murder. Overall, during his criminal career it is estimated that Al Capone made between $60 and $100 million a year through his illicit ventures.

There was no doubt that he was organized crime's master kingpin of that Chicago era.

There is also no doubt that Al Capone would have to answer to a Higher Authority for his crimes and indiscretions.

Not many people know that Al Capone was born into a devout Italian Catholic family. In essence he continued his religion, although lukewarm at best, when he married Mary “Mae” Coughlin, an Irish Catholic, in 1918.

Capone’s father (a barber) and mother emigrated to the United States in 1895, bringing with them two children. In 1899, Alphonse "Scarface” Capone was born in Brooklyn and his birth was followed by five more—in all there were eight Capone children.

Al Capone’s mother, Theresa, was a devout Catholic who attended daily Mass and who was a deeply religious woman. It was said that she never missed Mass a day of her life or missed Communion on a Sunday.

He and his brothers and were raised in the Catholic faith, but Capone was expelled from school at the age of 14 when he hit a teacher - early warning signs of events yet to come.

Al Capone married Mary “Mae” Coughlin in 1918 at St. Mary Star of the Sea Church in Brooklyn, New York. They had one son Albert “Sonny” Capone who was baptized at the church. Al truly loved his wife, despite his many, many women as a notorious philanderer and all the shame and embarrassment that she suffered because of his activities. Like her mother-in-law Theresa, Mae was a very religious person going to Sunday Mass and weekly services at least three times a week. Their one son, Sonny was both home-schooled but also educated at Catholic and private schools. He matriculated at the University of Notre Dame but later transferred to the University of Miami to be close to his home and ill dad. There he obtained a BA in Business.

Al Capone had been finally caught and sentenced to eleven years in prison for income-tax evasion. His story is that of the famous Elliot Ness and the Untouchables who successfully captured and prosecuted him.   He was released from prison early - three years short of his eleven-year tax-evasion sentence - in 1939, however, for health reasons as he suffered from syphilis and it began to affect his brain.

It is well known that for many who are serving hard time in prison, they have an opportunity to confront their demons and many have had a heart-felt, dramatic conversion back into morality.

While in Alcatraz, Capone, himself, had a conversion and returned to the Catholic faith. He and his several of his fellow inmates actually built the first chapel at Alcatraz in a small room off the infirmary. He began to frequently attend Mass in prison, routinely went to Confession, and received the sacrament of Holy Communion.

He became close to the prison chaplain, Father Joseph Clark, who also provided comfort and helped with his spiritual journey, especially as his syphilis progressed. By the time he was released from prison Capone reportedly had deteriorated to the mental age of a seven-year-old.

Al "Scarface" Capone, died in January of 1947.  Two hours before his death he received the Catholic sacrament of last rites from his parish priest, Monsignor Barry Williams.

His body was taken to Chicago to be buried at Mount Carmel Catholic Cemetery. The Archdiocese of Chicago actually refused a requiem Mass, however, they did allow a graveside ceremony celebrated by Monsignor William J. Gorman because Al had repented of his sins in his last years and showed true repentance, consistent religious practices, and a penitent lifestyle.  A photograph of Capone lying in his coffin showed his hands folded over a crucifix holding a rosary.

So where is Al Capone today?  A betting man would have said given his crimes and misdemeanors, his sinful life, the evil he spread upon others, certainly he is not in Heaven.

But true justice is not ours, it is the Lord's.  In the Gospel of Luke Jesus once said, "There will be more rejoicing in heaven over one sinner who repents than over ninety-nine righteous persons who do not need to repent."

Al Capone did not just flippantly go through the actions. His was a true and sincere conversion and had returned to his home of Catholic roots.

In this regard, his sins were forgiven and he would have joined with the saints in the Kingdom of Heaven.