Between 2007 and 2012, the number of individuals using heroin during the past 30 days more than doubled nationwide (161,000 to 335,000), and today roughly 948,000 people report using it in the past year -- with about 170,000 new people starting heroin use each year.
The Centers for Disease Control (CDC)
declared the national Heroin/Opioid problem an EPIDEMIC
There are now some 70,237 drug overdose deaths in the United States each year. Opioids—mainly synthetic opioids - are currently the main driver of drug overdose deaths. Opioids were involved in 47,600 overdose deaths (67.8% of all drug overdose deaths).
Prescription drugs can be addictive and lethal when misused.

Young adults, ages 18-24 are at higher risk for opioid addiction.

A person dies every 19 minutes from Prescription Drug Abuse.

Nonmedical use of prescription drugs was the second most commonly used
illicit drug among youth and young adults (marijuana is still number one).

Heroin abuse is associated with a number of serious health conditions, including fatal overdose, spontaneous abortion, and infectious diseases like hepatitis and HIV. Chronic users may develop collapsed veins, infection of the heart lining and valves, abscesses, constipation and gastrointestinal cramping, and liver or kidney disease. Pulmonary complications, including various types of pneumonia, may result from the poor health of the user as well as from heroin’s effects on breathing.

In addition to the effects of the drug itself, street heroin often contains toxic contaminants or additives that can clog blood vessels leading to the lungs, liver, kidneys, or brain, causing permanent damage to vital organs.

When it enters the brain, heroin is converted back into morphine, which binds to molecules on cells known as opioid receptors. These receptors are located in many areas of the brain (and in the body), especially those involved in the perception of pain and in reward. Opioid receptors are also located in the brain stem, which controls automatic processes critical for life, such as blood pressure, arousal, and respiration.

Heroin overdoses frequently involve a suppression of breathing. This can affect the amount of oxygen that reaches the brain, a condition called hypoxia. Hypoxia can have short-and long-term psychological and neurological effects, including death, coma, and even permanent brain damage.  This is the most usual way that people die in opioid or heroin overdose - they simply stop breathing.

Heroin is one of the most addictive substances known.  Chronic use of heroin leads to physical dependence (addiction), a state in which the body has adapted to the presence of the drug. If a dependent user reduces or stops use of the drug abruptly, he or she may experience severe symptoms of withdrawal. These symptoms—which can begin as early as a few hours after the last drug administration—can include restlessness, muscle and bone pain, insomnia, diarrhea and vomiting, cold flashes with goose bumps (“cold turkey”), and kicking movements (“kicking the habit”). Users also experience severe craving for the drug during withdrawal, which can precipitate continued abuse and/or relapse.

Besides the risk of spontaneous abortion, heroin abuse during pregnancy is also associated with low birth weight, and delays in development, and if the mother is regularly abusing the drug the infant may be born physically dependent on heroin and could suffer from neonatal abstinence syndrome (NAS), a drug withdrawal syndrome in infants that requires hospitalization. 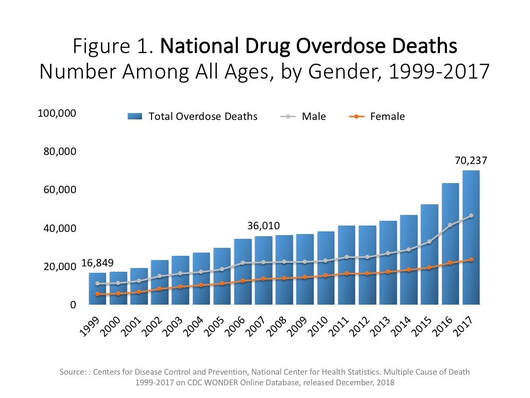 A further problem with heroin use is that heroin is often "cut" or mixed with other drugs such as fentanyl or carfentanyl.  Fentanal is 50 times more potent than morphine, and carfentanyl can be as much as 100 times more potent.  Other analogues are being developed by underground chemists, which are just as deadly.  These other synthetic drugs, when mixed with heroin often become far more powerful - and deadlier, and users have neither any idea what they are using nor the strength nor purity of the substance(s).

Ultra High Dosage Unit (UHDU) opioids have now been approved by the Food and Drug Administration for specific medical protocols. They are formulations that when taken as directed exceed 90 morphine milligram equivalents (MME) per day, a dose the Centers for Disease Control and Prevention (CDC) has determined to be dangerously high, for instance, taking one OxyContin 80 milligram tablet twice a day is consuming the equivalent of 240 MME, far exceeding CDC’s 90 MME upper dose. Because only one pill is taken at a time, the patient and prescriber may not appreciate that this is an extremely high dose.

Some 11.5 million Americans each year are estimated to have misused prescription opioids. The most common  motivation for misuse (63%) was to relieve physical pain. Someone who borrows a single dose of an UHDU opioid from a friend or family member to use for pain relief could, unknowingly,  experience life-threatening respiratory depression.
An overdose could also occur in the opioid-tolerant patient who accidentally takes just one extra dose or who intentionally takes an  extra dose for unrelieved pain. UHDU opioids are equally dangerous when misused for recreational purposes. For example, an opioid naive teenager who makes the mistake of experimenting with an UHDU opioid could  suffer a fatal overdose from just one pill.

A new drug called "grey death" has been linked to a handful of lethal overdoses across the nation -- but no one knows exactly what it is, what is in it, or where it is coming from. It is called Grey Death as it has the appearance of  concrete mixing powder.

The drug, a mix of opioids, including designer drug U-47700, heroin, fentanyl, carfentanyl, and fentanyl-like molecules, can kill in very small doses.
The chemicals are all very potent and very deadly in isolation, but together they spell disaster.  And because the ingredients change from sample to sample, each batch of grey death is a mystery -- right down to its signature color.

Warning:  Grey Death is typically so strong it can cause immediate death by overdose—not only by drug users but by anyone who touches it, such as first responders.  First responders have been notified and trained to use universal precautions when addressing this substance.

Even in minuscule doses or with minimal contact, the effects of the drug are serious and can include immediate overdose.  And while the same tools and methods used to reverse a heroin overdose can be used to reverse a grey death overdose, the process is more challenging. A grey death overdose might require multiple doses of naloxone (Narcan). Some people have needed up to 10 doses to recover, which can be a huge problem since family members or first responders usually do not have that amount on hand.

Prescription Opioids and Heroin  --- What you should know!

What you can do:

· Educate yourself:
· Be aware of the medications in your home and lock up those medications that have the potential
for abuse. If you aren’t sure which medication can be addicting ask your pharmacists or physician.
· Familiarize yourself with warning signs of prescription (or over-the-counter) medication abuse.
· Communicate with your children and family about the dangers of opioid abuse and keep the lines of communication open. Let them feel comfortable coming to you with questions or concerns about drug use.
· Remind family members in your home that many medications do not mix well with alcohol or other
medications, including over-the-counter remedies, and,
· Teach your teens and younger children to respect medicines. Medicines are important tools in health care but they must be used according to directions.
Heroin - in fact all opioids, are powerful, highly addictive,
and toxic drugs -  treat them for the danger they present.