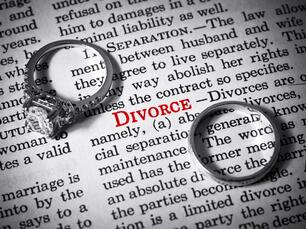 
Divorce means to dissolve the marriage bond, to end a marriage. But it can also mean a curse placed upon your children as well as an intergenerational curse upon your grandchildren.

The Meaning of Marriage Vows

A traditional wedding vow is a solemn oath, and oath of loyalty for life.  It usually takes some form of "I take you to be  my (husband/wife), to have and to hold from this day forward, for better or worse, for richer or poorer, in sickness and in health, to love and to cherish, until we are parted by death. This is my solemn vow."

Today however, many couples prefer the more modernistic - and temporary vow, "I take you to be my life partner and for all it gives, for as long as our love shall last."

The difference of course is not just simple wording, but in the total commitment and permanence of the sacred marriage vow.

Marriage is the union of two individuals into one new unit - one soul, one family.  The new unit, the family, supercedes the old units which were individuals.  In other words, in marriage one does not think of what is best for "me", but what is best for our family.  One no longer pursues self-interests, but voluntarily yields that to the interests of the family.  One does not pursue pleasure, fun, drinking, drugging or other sexual conquests because now the integrity of the family reigns supreme and his/her goal is to protect and guide that new family unit from all unhealthy and destructive forces.

Divorce can mean tearing a beautiful family unit un-whole, causing it to become incomplete, never again to be full and joyous, never again to experience the holidays or celebrations without the feeling that someone is missing in that empty chair.

Divorce is a poorly understood phenomena in American culture.  While most people agree that divorce is undesirable, few people truly recognize the full degree of destruction and permanent harm it causes. New research finds that it is one of the most deleterious of the weapons of mass destruction for any society.

Many pop-psychologists will argue that divorce, when "properly" explained and with the full cooperation of both parents, will have no traumatic or lasting negative effects upon the children.  These psychoilogists, all too often, have been proven wrong.  Just ask the children.  In the vast majority of cases they do not understand why their families were torn apart, and in 90 percent of the cases they will say that they want their family back together again.

Divorce has led to the ruin of hundreds of thousands of children and adults. It destroys in a subtle way, usually in a subtle and injurious way and is much under-appreciated. Divorce is a life-transforming experience for all parties involved, and much research has shown that the after-effects on the family are traumatic and often chronic.

Compared to children from healthy, functional homes, children of divorce are far more likely to struggle academically, engage in drug and alcohol use and other high-risk behaviors, commit suicide, experience psychiatric problems, live in poverty, experiment sexually at earlier ages, and have a greater likelihood to divorce themselves.  Many researchers will state that in America we have created a social dynamic where the end result has been disposable marriages and shattered lives.

Many researchers conclude that divorce harms children in virtually every measure. Furthermore, numerous studies support marital longevity as a vital component of good health for children and adults alike. The quality of life is usually far better in intact families, and satisfaction with life - another leading indicator for the quality of life - is also far greater.

Children's Souls are "Ripped in Half"

The research supports the common findings by mental health professionals that children suffer terribly in divorce, and many times the “children’s souls are basically ripped in half.” Even years later - as adults, children from divorced families are even less satisfied in their lives compared to adults from intact and happy families

About 50% of all marriages will end in divorce in the United States.  The rate is lower for highly educated couples, and higher for low income couples.

The divorce rate began to rise in the mid-1960s due to the rebirth of feminism, new levels of social stress, cultural instability, sexual liberation, and the adoption of “no-fault” divorce. Of course not all marriages fail for the same reason. The factors that seem to contribute the most include poor communication, financial problems, a lack of commitment to the marriage, a dramatic change in priorities, and infidelity. These factors together made marital stability more problematic, and divorce far easier.  However, more often than not, these "underlying problems" in marriages can be dealt with through counseling and open communication and self-growth.  The real rate of divorce as it should be, should not exceed even 5% of the current level.

Divorce as another Social Experiment has failed

For those who do advocate for divorce as a viable option, it needs to be stated that "divorce as another social experiment has failed."  Some fifty years of study found that the decline of the two-parent, married-couple family results in poverty, educational failure, unhappiness, anti-social behavior, isolation, emotional problems, and social exclusion for thousands of women and men. Again, especially affected are the children of divorce - CODs.

Divorce is also intergenerational. Children fail to successfully learn how to navigate through all the boundaries and obstacles of marriage. They learn that rather than cope, they can just "opt out" like mother or father did. This sets up a very negative cycle.

The Rights of Children

A final point to consider is that divorce is all about the rights of adults.  It is rarely about the rights of children, who, again in the vast majority of cases would say, "No - I do not want to be torn apart and have a split and chaotic life from this point on."  Divorce is too often based upon adult pride and ego, without consideration of the rights of the children.  Children need their families, and they have the right to have a healthy, functional, intact family.

The family is a critical cornerstone of society, and healthy families bring strong stability and blessings to all society.  The truth is that divorce and the dissolution of families remains one of the strongest of the weapons of mass destruction for America.