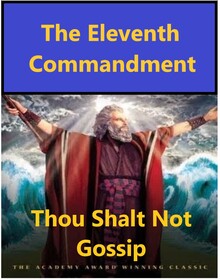 Thou Shalt Not Gossip”


Gossip and Rumors Leads to Trouble

Gossip is a rumor or talk in a personal, sensational, or intimate matter. Gossip and rumors are often the most usual and natural type of communication, but at the same time can seriously hurt someone.

Many times people while talking in the moment, gravitate into something a little personal. But people who are habitually personal or who speak their minds all the time not only end up offending others, but often say things that aren't true. After all, not every thought one has about someone else is accurate or right. No, opinions and judgments may be based on incomplete or false information, or even be totally in error. It happens very often and to everyone. In fact, it is not infrequent that one discovers that they were completely wrong about someone. But by then the harm has been done.

Countries Have Fallen Because of Gossip

Gossip harms people. Gossip harms relationships. Gossip harms marriages. Gossip harms everyone. Sometimes people get a sense of power from gossip. Other times it is easier to gossip than to face and deal with your own problems in life. Gossip also makes you feel better about yourself and your issues. And some people think that by tearing someone else down, they can build themselves up.

The truth is that one lie can destroy a thousand truths. The Bible warns that only the fool "delights in airing his own opinions." Instead, the Bible instructs us to guard our tongues from speaking evil of others, and to say only what is constructive. It says, "Do not let any unwholesome talk come out of your mouths, but only what is helpful for building others up according to their needs, that it may benefit those who listen" (Ephesians 4:29).

"Try not to take things personally; what people say about you is a reflection about them - not you." Think about when you have been the subject of gossip or a rumor, and the sting of humiliation you've felt. Nothing can create as much tension as gossip. Gossip has brought down entire countries. Gossip has even started wars! Gossip destroys family loyalty. Employers have found that gossip creates the most tension in the workplace. The power of speech (i.e. speech unrestrained) remains more powerful than the word. Remember, entire civilizations have fallen because of gossip!

In addition, researchers found a progressive, multiplying effect with gossip, i.e., it grew and became stronger and stranger each time it was told. Each time a statement of gossip was repeated, the gossip item had more discrepancies.
""Somebody Said That Somebody Said”

"Somebody said that somebody said.
Trouble was caused and suspicion fed.
Somebody passed on an idle word.
Someone repeated what someone had heard.

There has been many a broken heart.
Many a marriage has come apart.
Many relationships have been changed.
Many a neighbor become estranged.

In many a home where peace once reigned,
affection and loyalty have been strained,
and many a life is incomplete
all because someone was indiscreet.

Many a friendship has been wrecked
through gossip unfounded and unchecked.
Mischief was made and rumor spread.

Another problem with gossip is that it rebounds back upon oneself.  We don't want others gossiping about us, so the best remedy is to be sure not to gossip about them - even if it "feels good at the time."  If a boss or co-worker is gossiping and you feel uncomfortable, change the subject so that you don't have to participate in gossip that can end up hurting other people's feelings.

-- Socrates
People who speak their minds all the time or who “speak before they think” often end up offending others and often say things that aren't true or that have a rational explanation. After all, opinions or judgments may be based on incomplete or false information, or even totally in error. How many times have people said something defamatory only to later realize that they were completely wrong about someone.

The Bible warns that only the fool "delights in airing his own opinions" (Proverbs 18:2.)    Instead, the Bible instructs “to guard our tongues from speaking evil of others, and to say only what is constructive.”  It says, "Do not let any unwholesome talk come out of your mouths, but only what is helpful for building others up according to their needs, that it may benefit those who listen" (Ephesians 4:29).