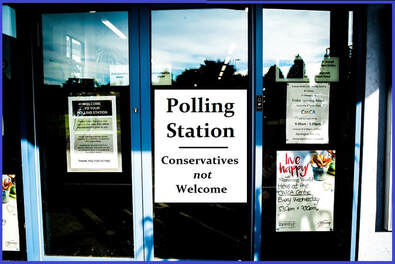 Why the
Democrats are
Imploding

What happened to the Democrats?

After many years of trust, all of a sudden the inner workings of the Democratic Party were exposed and it was a litany of dirty laundry. The degree of fraud, corruption and scandal heightened to an unacceptable level.  The leaders were no longer trustworthy.  The lies were exposed and it caught up with them when they violated their promise to the voters for transparency, honesty and integrity. And they were found guilty and held responsible by the American people.

(1) They Went Full Liberal:  One analyst noted that there are no more moderates in the Democratic Party.  They were overtaken by the progressives and extreme far-left obsessive-compulsive liberals who no longer supported the average family or concerns of the average American.
They adopted policies the public did not want - abortion to the point of killing babies even after-birth (infanticide); euthanasia of the elderly and most vulnerable; legalization of drugs; recommendations for self-regulation by banks; etc.

(2) They Became too Negative and too Vocal:   Yes, politics show that "going negative" can have more persuasive power than positivism in political campaigns.  But the democrats became too negative.  They became too rigid and unyielding.  They refused compromise even when it was in the best interest of the people.  And they refused to acknowledge the good work done by the "other party" when it did not fit their self-interests (for instance in the repeal of NAFTA, or in the reduction of taxes for the average American family, or with President Trump's new directive allowing for low-cost medications to be purchased from Canada saving Americans billions in health care costs, etc.)
The democrats cried "Wolf" again and again. The democrats became the divisive element of society calling everything racism to deflect from the real issues, criticizing the legitimate protective goals to prevent illegal immigration, downplaying attempts to bring jobs back to America, instilling a new brand of identity politics, etc.  In effect, the Democrats criticized every policy and plan of the president, and manipulated the media toward furthering their own agenda of anger and even hate toward impeaching the president.

(3) They Became Total Hypocrites:  The democrats criticized Donald Trump for hesitating when asked during the debates if he would "accept the outcome of the election" and yet, they themselves did not accept the outcome, and since the election have used every legal trick and deceptive ploy to have him impeached.  They continually point at the President and accuse him of spreading division and having caused anger and outrage, when they themselves are the primary culprits.
And while many of the democratic candidates champion economic policies which are "socialistic" and speak about taxing the rich as fiscal redeemers, many are, themselves, multi-millionaires and do not contribute any more than that absolutely necessary as "their fair share" to the government tax coffers.

(4) They became Unrealistically Arrogant:  Instead of admitting and accepting responsibility for their actions and short comings, the Party maintains an arrogant and aggressive posture. They are offensive, defensive, and insulting often causing unneeded divisiveness and disunity among the electorate.
The in-house fighting peaked with them even having turned against themselves, most notably attacking Joe Biden - the frontrunner of the campaign for president.  They even turned against the policies of Barrack Obama - a one time wonder for the Democratic Party, and they continually argue and bicker over proposed legislation within their own party. The one element of unity needed to win the presidency has been rejected for 15 seconds of fame in the camera spotlight.

- The Clinton Foundation remains in investigation by federal authorities.  And the fact is that Hillary Clinton authorized the sale of 20% of the U.S. uranium to Russia, while receiving over 145 million dollars in Russian money (seemingly unrelated) while then accusing Donald Trump of having conspired with Russia. This is very perplexing, and one analyst stated that he believed Clinton collaborated with Russia while deflecting blame by accusing Trump of that very same crime.

- The DNC fed questions over to the media in preparation of the Presidential debates.

- The DNC ran a democratic candidate for the Presidency (Hillary Clinton), who had a 46% disapproval rating from the general public.

- The DNC consciously plotted against Bernie Sanders to upset his potential win over Hillary Clinton. This came to light after the hacking of the DNC servers and with the subsequent resignation of Democratic National Committee chairwoman Debbie Wasserman Schultz.
John Podesta, who served as a top White House aide to the last two Democratic presidents, Bill Clinton and Barack Obama, and was believed to be in line as White House Chief of Staff if Mrs. Clinton had won the presidency, has since the election reportedly dedicated much of his time to "trying to expose the connections between Mr. Trump and Russia." (They keep trying!)  Tony Podesta, John Podesta's brother, has stepped down as the head of a lobbying firm that was under investigation by the special counsel Robert Mueller.

- Hillary Clinton, herself, was caught in a web of untruths.

- Judicial Watch released a series of conversations obtained through a FOIL, showing that the FISA warrants were the result of a corrupted process, conflict of interest, and resulted in extraordinary spy warrants targeting candidate Donald Trump "showing an unprecedented and irregular effort by the FBI, DOJ, and State Department to dig up dirt on President Trump."

- The democrats forced a spurious hearing on Supreme Court Justice Brett Kavanaugh, shamefully humiliating him across America for something he may not have done - and even so, it was for something that happened 40 years ago and which was no longer relevant in any way.

- Democrats may have been behind a fraudulent structuring and purchase of a "dossier" on a Russian-Trump collusion - in part funded by the Clinton campaign, that never happened.

- DNC sympathists may have allegedly leaked numerous news stories to the press about the Mueller investigation.  It was also found that former FBI Director William Comey had leaked classified memos and showed a lack of candor with investigators, but was not prosecuted for this (these) crimes.  One memo in particular includes classified information Comey leaked to a friend to leak to the New York Times "anonymously."

- The F.B.I. gave Hillary Clinton a pass on any arrest for her e-mail scandal when, as according to the State Department, there were 2,093 email chains on the server that were retroactively marked as classified by the State Department as "Confidential," 65 as "Secret," and 22 as "Top Secret."  Hillary also instructed the destruction of some 30,000 emails (evidence.)  The F.B.I. also reportedly gave immunity to other Clinton staff, and allowed them to destroy phones and computers after initial examination.

- There are reports of state democrats having refused requests for transparency similar to practices ages past dealings in "smoke-filled backrooms." One finding of  final results in one state was that it was "tabulated by a single person onto an Excel spreadsheet that no one is allowed to watch."

- There is even a question as to whether the DNC pressured Joe Biden to withdraw as a Democratic candidate from the 2016 election to allow Hillary Clinton to run, expectedly unopposed.

- In fact, many democrats are still upset as they believe that the DNC is still giving preferential treatment to select candidate(s) for the 2020 election.


Time for a Federal Investigation ?

Certainly several associates of President Trump were arrested for crimes unrelated to the so-called Russia Collusion.  Would it not be fair, then, to hold the primary democrats involved in these scandals to the same standards?  If so, then several high level officials could be looking at serious prison time.  At the very least, the DNC needs to make a concerted effort and expel all of these contaminants from within the DNC party.  It is time to clean house, apologize to the American people, and begin anew.   The people - the real democrats behind the party, eagerly await.