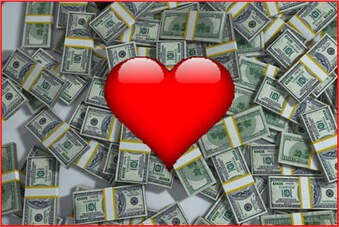 Do Rich People
Go to Hell
When they Die?

The short answer is definitely, "Maybe."

It truly depends upon a number of variables.  Most clergy will tell you that in and of itself, having money does not condemn a person to eternity in Hell.  More importantly, though, is what a person DOES with the money.

-- If one is rich and uses that money in a self-indulgent, self-centered, pleasure oriented lifestyle, then that person may be in jeopardy of losing his/her soul for all eternity.

-- If one is abundantly well off but neglects the charitable needs of others, then that person is in jeopardy of losing his/her soul for all eternity.

-- If one who is prosperous finds that he is in a state where he now loves money above all else, then that person is in jeopardy of losing his/her soul for all eternity.

-- If one who is wealthy finds that that wealth leads him/her into sinful behavior - adultery, drinking and drugging, unethical and immoral behavior, etc., then that person is in jeopardy of losing his soul for all eternity.

-- If one has acquired their riches through either illegal, illicit, unethical, immoral or otherwise fraudulent means, then that person is in jeopardy of losing his soul for all eternity.

-- And, if one who is affluent finds that the money has led him away from God, that he now neglects the God that provided him with the blessing because he is too busy with business or with life, or he now no longer needs God because he is self-sufficient, or he now rejects the practice of his religion because he is modern, then that person is in jeopardy of losing his/her  soul for all eternity.

For the Love of Money is the root of All Evil

In the Gospel, a young rich man approached and asked Jesus what he needed to do in order to inherit eternal life. Jesus replied that he should keep the commandments, to which the man stated he had done.
He then asked Jesus, what else can I do to assure eternal life?  Jesus responded, "If you want to be perfect, go, sell your possessions and give all to the poor, and you will have treasure in heaven. Then come, follow me."
The young man became sad and was unwilling to do this and turned away. Jesus then spoke to his disciples, "I tell you the truth, it is hard for a rich man to enter the kingdom of heaven. Again I tell you, it is easier for a camel to go through the eye of a needle than for a rich man to enter the kingdom of God."
When the disciples heard this, they were greatly astonished and asked, “Who then can be saved?” Jesus looked at them and said, “With man this is impossible, but with God all things are possible.”

That young man loved God.  The problem was that he loved money more.

And so do so many bankers, doctors, lawyers, financiers and businessmen.  They have come to idolize money to the point of loving money more than God.  Be careful... the love of money may be the root of all evil!