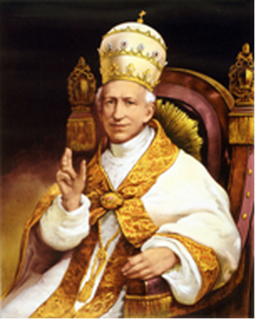 The Pope Who Saw the Future

The Mystical Ecstasy of Pope Leo XIII:
The Confrontation between Jesus and satan
that Shook the Roots of the Church

The Roman Catholic Church has survived over 2000 years.  The reason is that it is of Divine Origin with roots leading to Christ, Himself, and is sustained by the Grace of God.  As such, the Catholic Church claims to have had many miracles and help from above for perpetuity and building their 1.2 billion member church.

There have been 266 Popes.  The first was Simon Peter, who was appointed as head of the Church by Christ himself, "Peter, you are the Rock, and upon this Rock I will build My Church and the gates of hell will not prevail."  Upon Peter's death the apostles gathered and chose a successor to lead them, and that process has continued throughout the next two thousand years.

Many Popes have established themselves as men of God. Many have experienced miracles.  Many have shown great moral and intellectual leadership and have authored sound religious and spiritual doctrines.

But one of the most notable Popes was Pope Leo the XIII who served from 1878 to 1903 (25 years.)  He was a great Pope who supported Christianity against Communism, promoted the prayers of the rosary and scapular, showed devotion to Mary - the Blessed Mother of Christ, and established many writings and doctrines rich in spiritual grace.

What happened to Leo XIII, however, was a remarkable event that shaped the future of Catholicism for the next 100 years.

On October 13, 1884, Pope Leo XIII finished saying Mass.  He turned to step down the stairs, and collapsed, falling into what was thought to be a coma or even death.

The priests and even cardinals rushed to his side, fearing the worse.  The Pope rose, and was visibly shaken.  He looked traumatized.

Pope Leo did not die.  Allegedly, he fell into what is known as a mystical ecstasy.  Upon his recovery he revealed that he heard a confrontation between satan and Jesus coming from in front of the tabernacle.

He reported that he heard a deep gruff voice which the Pope identified as satan, boasting that he could destroy the Holy Catholic Church and have the whole Church under his domain if only he “had more time and more power.”

He hard a gentle, masculine voice say, “How much time… how much power?”

The deep voice replied “One hundred years, and power over those who would give themselves in service to me.”

The Pope reported that he then saw a horrifying vision of the evil demons all being released from hell.

He rushed back to his apartment where he immediately wrote a Prayer of Leonine Exorcism – the prayer to St. Michael the Archangel to “protect us in battle.”  He then mandated this prayer to be said after every Mass from that point forth.

The Pope saw, and realistically feared, that satan would attempt to destroy both the Church, the deposit of faith, and the Dogmas of the Church. To try to protect the Church and all families, he wrote a prayer for a powerful intercession by the great St. Michael the Archangel to confront and defeat satan.

Between 1882 and 1902 Pope Leo also wrote 12 Encyclicals on the Rosary.  It was if he was saying “Here is the answer… here is the weapon against satan… the power of the Rosary…. put yourself in the hands of the Mother of God.”

In 1934, however, Pope Leo’s intercessory prayer was changed without explanation.  It was replaced by an abbreviated Prayer to St. Michael, which still is powerful but not as strong as the original.

The new prayer reads, “St. Michael the Archangel, defend us in battle, be our protection against the wickedness and snares of the devil; may God rebuke him, we humbly pray; and do thou, O Prince of the heavenly host, by the power of God, thrust into hell satan and all evil spirits who wander through the world for the ruin of souls. Amen.”

This is a very holy prayer, but not the original Prayer to St. Michael that Pope Leo composed and ordered to be recited at every Mass.  It is believed that Church authorities substituted this new prayer to keep people unaware of the incredible content of the original prayer.  The Church also withdrew the “mandate” to say even this modified prayer after every Mass.

The 20th century was the worst century in all history.  There were two world wars, numerous localized wars, outbreaks of famine and disease and crime and violence, and a growth in immorality unparalleled in all history.  There was a breakdown in the family as never seen before, an increase in drug use, and the world turned to greed.  It truly was satan's century.

Many Catholics believe that satan has targeted a systematic dismantling of the traditional Roman Catholic Church, including the Faith, Dogmas, and Sacraments. They believe that the problems of the Church including the scandal, loss of vocations, and falling away from the faith is the result of his surge of power this last century.

They believe that the 20th century was given to satan as a time of testing for humanity, and that this past century has been the most sinful in all history with all the wars and atrocities.  They also believe that although he is acting more aggressively in causing immorality, his power is staring to wane.

Pope Leo XIII had a mystical experience. That experience, original Prayer to St. Michael, and eventual suppression of that prayer remains one of the most interesting and controversial events relating to the present situation in which the true Catholic Church finds itself.