The Centers for Disease Control (CDC) reported that suicide has increased every year since 1990 and is now the 10th leading cause of death.  Globally suicide is now the second leading cause of death among 18-24 year olds, eclipsed only by motor vehicle accidents. While a number of causative factors have been identified, the CDC clearly reports - and others confirm, that substance abuse is one of those factors. A second finding is that substance use itself - including marijuana use, may facilitate the transition from suicidal ideation to actual suicidal behavior (completion.)

"Young Adult Sequelae of Adolescent Cannabis Use: An Integrative Analysis", one of the biggest studies of its kind on the issue of marijuana — looked at data from three large, long-running longitudinal studies in Australia and New Zealand. Researchers found that, after controlling for 53 factors ranging from socioeconomic differences to mental health, young adults who used marijuana more frequently before age 17 were more likely to have worse outcomes by age 30 for high school completion, university degree attainment, suicide attempts, and other illicit drug use. 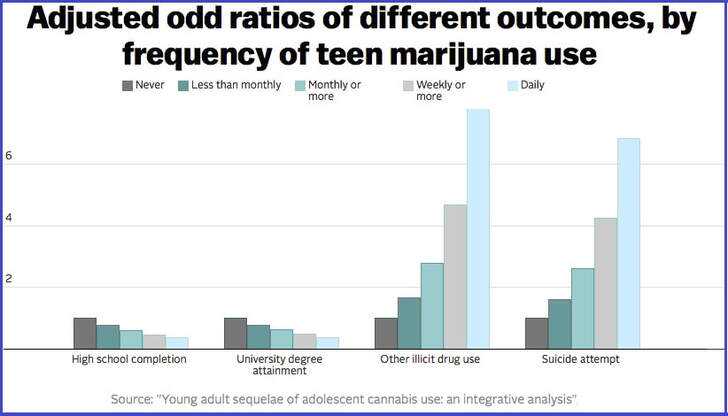 "Youth who used marijuana daily were 7x's more likely to attempt suicide."
The findings showed clear and consistent associations between the frequency of adolescent cannabis use and all adverse young adult outcomes, and the associations had dose-response characteristics across all seven outcomes, with the strongest effects shown for daily users.

A large-scale epidemiological study funded by the National Institute on Drug Abuse also found that people who smoke marijuana before age 17, are 3.5 times more likely to attempt suicide as those who started smoking marijuana later in life. In addition, people who are dependent on marijuana have a higher risk of experiencing major depression and suicidal thoughts and behaviors.

A recent report from the Colorado Center for Health shows that suicide where marijuana is present has increased over 350% since 2004 in that state, with marijuana being the #1 substance now found in suicides of young people in Colorado who are 10-19 years old.

And in a study released through the JAMA Psychiatry in 2019, Marijuana Linked to High Risk of Depression and Suicide in Teenagers, researchers found that teenagers who use cannabis could be at a higher risk of attempting suicide and experiencing depression.  To investigate the potential mental health risks of using marijuana, researchers reviewed numerous featuring a total of 23,317 participants.
Those who had used cannabis were found to be more likely to experience depression, suicidal thoughts and attempt to take their lives.
The authors concluded: “The high prevalence of adolescents consuming cannabis generates a large number of young people who could develop depression and suicidality attributable to cannabis.”